Although it was hypothesised >20 yr ago that prostatic inflammation could influence clinical presentation and possibly surgical outcome in patients treated for symptomatic benign prostatic hyperplasia (BPH) [1], substantiating evidence was scarce. Since then, evidence has steadily accumulated that points to the role of inflammation in the pathogenesis and progression of BPH and its relationship to lower urinary tract symptoms (LUTS). The current challenge is to apply this knowledge to effect clinical changes that will improve treatment outcomes. This review examined evidence for the role of inflammation in the clinical presentation of BPH-related LUTS (BPH/LUTS).

This article is based primarily on material presented at a satellite symposium entitled “Inflammation and Prostatic Diseases: From Bench to Bedside”, held during the 2015 annual meeting of the European Association of Urology in Madrid, Spain. Current data regarding the link between inflammation and BPH were reviewed. The article is complemented by relevant related literature identified on PubMed and by hand searches of key references.

3.1. The role of inflammation in lower urinary tract symptoms due to benign prostatic hyperplasia and progression

The Reduction by Dutasteride of Prostate Cancer Events (REDUCE) clinical trial provided a unique opportunity to examine longitudinally the effects of prostatic inflammation on patient outcomes. In this international multicentre study, >8000 men aged 50–75 yr with elevated prostate-specific antigen (PSA) levels but negative prostate biopsy (6–12 cores) were randomised to receive dutasteride or placebo for up to 4 yr [2]. At baseline, the type and severity of prostatic inflammation were documented to determine whether inflammation might predict outcomes such as prostate cancer, BPH/LUTS, or progression over the 4-yr study period. Inflammation was described by type (acute or chronic) and graded on a modified four-point scale (none = 0, mild = 1, moderate = 2, marked = 3) based on inflammatory cell density and extent of tissue involvement [3]. LUTS were assessed using the International Prostate Symptom Score (IPSS).

Robert and colleagues examined the relationship between inflammation intensity and clinical outcomes in 282 patients who had undergone surgery for complicated and/ or symptomatic BPH [5]. Prostatectomy specimens were used to build a tissue microarray (four spots per patient) and prostatic inflammation was graded using a combination of cytologic parameters and immunohistochemical markers. Patients were separated into two groups based on the median inflammation score. Compared with patients with lowgrade inflammation, patients with high-grade inflammation had a significantly higher IPSS (21.2 vs 12.8; p = 0.02) and significantly greater prostate volume (104 vs 90 g; p = 0.01). Patients with high-grade versus low-grade inflammation were also more likely to have undergone open prostatectomy (62% vs 43%), which, in itself, is an indication of greater prostatic volume [6].

The association between the intensity of histologic inflammation and BPH parameters of prostate volume, IPSS, and surgery type reported by Robert et al [5,6] raised the question of whether histologic inflammation influences BPH outcomes. This question was possibly best addressed by the randomised, double-blind, placebo-controlled Medical Therapy of Prostatic Symptoms (MTOPS) study, which examined the long-term effects of doxazosin and finasteride, alone or in combination, on the clinical progression of BPH [7]. Of 3047 men with symptomatic BPH recruited into the study, 1056 had randomly undergone sextant prostate biopsy at baseline. Histologic inflammation was documented in 46.5% of this subset and was mainly chronic (93% of cases); the remaining patients showed no evidence of inflammation. Depending on the presence or absence of inflammation, clinically significant differences in BPH progression were observed [8]. Among patients with biopsy who had been treated with placebo (ie, outcomes were not confounded by active treatment), the proportions with clinical progression, increased American Urology Association symptom scores, and need for invasive therapy were consistently greater in the group with inflammation versus the group without, although the differences were not statistically significant (Fig. 1). The most notable finding, and notwithstanding the limited sample size, was the difference in the proportion of patients who developed acute urinary retention (AUR) between those with and without inflammation (5.6% vs 0%; p = 0.003) (Fig. 1). In other words, after 4 yr of observation, every case of AUR that occurred in the placebo group involved a patient with histologic evidence of inflammation at baseline; therefore, inflammation was shown to be a strong predictor of BPH progression. 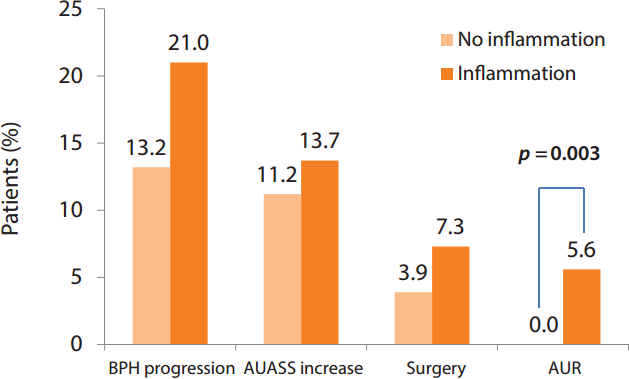 Numerous studies have reported a strong independent association between components of the metabolic syndrome and BPH/LUTS [12]. Given the association between the metabolic syndrome and various inflammatory biomarkers [13], inflammation has been proposed as the link between the two conditions. The correlation between the severity of preoperative BPH/LUTS and features of the metabolic syndrome was examined retrospectively using specimens from 271 consecutive men treated with simple prostatectomy [14]. Nearly one-third of the sample (n = 86) had the metabolic syndrome, based on international criteria for the presence of at least three of the following five characteristics: elevated blood pressure, elevated triglyceride levels, lowered high-density lipoprotein cholesterol (HDL-C) levels, elevated fasting glucose, and central obesity [15]. Among the entire population, a direct correlation was observed between prostate volume (r = 0.151; p = 0.023) and prostate diameter (r = 0.267; p < 0.0001) and the number of positive components of the metabolic syndrome. In particular, patients with three or more parameters (ie, those who met the criteria for metabolic syndrome) had, on average, a prostate volume >60 ml and an anteroposterior diameter >45 mm. A correlation was also observed between the pathologic characterisation of the surgical specimen and clinical symptoms, with an inflammatory score of severe corresponding with a mean IPSS of 22.46 (an IPSS score ≥20 indicates severe LUTS). After adjusting for age, logistic regression analysis identified low HDL-C and elevated triglyceride levels, in particular, as putative predictors of a higher score for inflammatory infiltrates [16]. It appears increasingly certain that other diseases associated with metabolic syndrome and its risk factors are also associated, via inflammation, with the pathogenesis, clinical implications, and progression of BPH/ LUTS (Fig. 2) [17]. 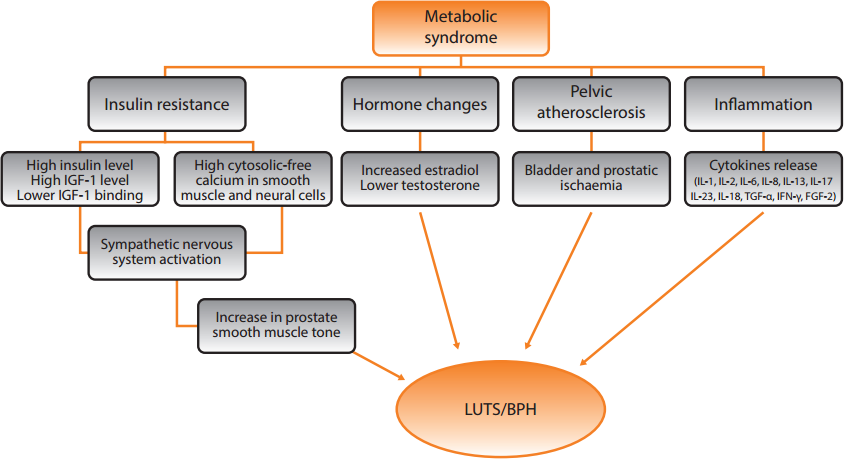 3.2. Impact of inflammation on treatment considerations

Evidence that inflammation contributes to BPH pathogenesis, is associated with symptoms, and is at least partly responsible for progression underpinned the reasoning that targeting inflammation would have a positive impact on BPH. Although there are no large-scale studies published to date to confirm this hypothesis, evidence from a few small studies suggests that reduction of inflammation provides clinical benefits. Given the known overexpression of cyclooxygenase (COX)- 2 in prostatic smooth muscle cells [18,19], selective COX-2 inhibition was a natural target.

In a single-centre unblinded trial from Italy, 46 consecutive men with BPH and LUTS were randomised to receive finasteride 5 mg/d monotherapy or finasteride 5 mg/d plus rofecoxib 25 mg/d for 24 wk [20]. Improvement in total IPSS was more rapid in patients treated with the finasteride/ COX-2 inhibitor combination, particularly during the first 3 mo of treatment (Fig. 3). The rofecoxib-induced reduction in inflammation appeared to have a more immediate effect on clinical symptoms, and this persisted until the effects of finasteride began to predominate.

In a separate group of 57 patients with BPH-related LUTS, the combination of doxazosin 4 mg and tenoxicam 20 mg for 6 wk improved the Overactive Bladder Symptom Score by nearly twofold compared with doxazosin alone (8.7 vs 4.8; p = 0.009), yielding significant improvement in both voiding and storage symptoms [21].

Despite such evidence of benefit, caution is advised when using nonsteroidal anti-inflammatory drugs (NSAIDS) and COX-2 inhibitors in patients with BPH/LUTS, as the longterm effects are unknown. Valuable lessons were learnt from the Adenomatous Polyp Prevention on Vioxx (APPROVe) study in which rofecoxib was compared with placebo for the prevention of colon cancer in at-risk patients [23]. A confirmed increase in the cardiovascular event rate (relative risk: 1.92; 95% CI, 1.19–3.11; p = 0.008) after 18 mo of treatment led to early termination of the study and eventual removal of rofecoxib from the market. 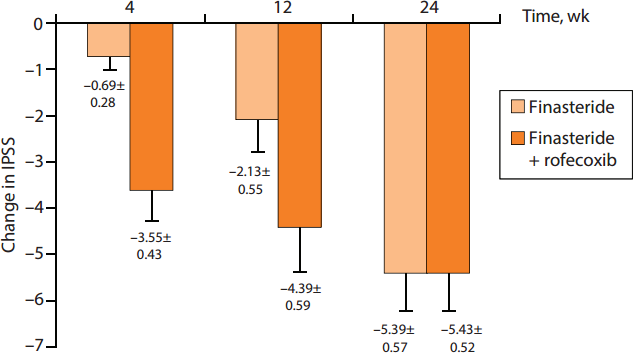 Evidence for the role of inflammation in BPH has several important implications for clinicians in everyday practice. As histologic inflammation appears to be a key component associated with the pathogenesis, symptomatology, and progression of BPH, knowledge of its type and severity is useful clinically. Inflammation has predictive value for BPH/ LUTS and, in certain situations, can be used to guide treatment decisions. The association between metabolic syndrome and increased risk for BPH/LUTS and BPH progression provides opportunity to intervene at the clinical level (eg, weight, diet, exercise) to possibly prevent the need for surgery. Motivated patients can assume a high level of personal responsibility to reduce their individual risk factors for BPH. On the basis of accumulating evidence linking inflammation to BPH risk factors (eg, metabolic syndrome, diabetes, age) and BPH progression, an anti-inflammatory treatment strategy might be considered in selected men with evidence of or risk for inflammation who may benefit from nighttime treatment with an NSAID to reduce nocturia episodes. Looking ahead, it seems clear that a urine or serum biomarker for prostatic inflammation would serve not only as a valuable noninvasive investigative tool but possibly also as a predictor of response to long-term anti-inflammatory therapy [24]. In light of mounting evidence for the link between chronic inflammation and development and progression of BPH, safe anti-inflammatory strategies may be the next frontier on the BPH management algorithm.

Participation in the satellite symposium, “Inflammation and Prostatic Diseases: From Bench to Bedside,” held at the annual meeting of the European Association of Urology in Madrid, Spain (March 2015), was sponsored by Pierre Fabre (Castres, France).

[8] Roehrborn C; The MTOPS Research Group. The impact of acute or chronic inflammation in baseline biopsy on the risk of progression in the MTOPS study. Eur Urol Suppl 2005;4:5.