The transcriptome of the aging prostate stroma is characterised by upregulation of numerous genes that encode secreted inflammatory mediators shown to stimulate prostatic cell growth [1]. As such, prostatic inflammation has been proposed as an appropriate target for medical treatment of lower urinary tract symptoms (LUTS) due to benign prostatic hyperplasia (BPH) [2]. In the 20 yr since the anti-inflammatory activity of hexanic extract of Serenoa repens (Permixon; Pierre Fabre, Castres, France) was first reported [3], a considerable body of in vitro and in vivo evidence has accumulated that demonstrates inhibition by Permixon of inflammatory cells (macrophages, T lymphocytes, B lymphocytes) [4,5] and a wide variety of inflammatory mediators and proteins [3,5–9] as well as deregulation of numerous genes known to play key roles in the proliferative, apoptotic, and inflammatory pathways of BPH [10]. Nevertheless, evidence of its antiinflammatory activity at the clinical level was lacking.

PERMIN was a randomised clinical trial designed specifically to investigate the anti-inflammatory activity of therapy intended for the treatment of BPH-related LUTS [11]. Based on our work at the University of Bordeaux and other published articles [9,10,12–20], the 29 most significant inflammation markers in BPH were identified and selected for investigation (Table 1). To better understand the mechanisms behind the anti-inflammatory effects of Permixon, tamsulosin was selected as the comparator because of its frequent prescription, well-established mechanism of action, and absence of any known anti-inflammatory activity. The PERMIN study has recently been reported in full [11]. This review examines some key features of the study and provides a clinical interpretation of the comparative effects of Permixon and tamsulosin on inflammatory markers in men with BPH-related LUTS.

This article is based primarily on material presented at a satellite symposium entitled, “Inflammation and Prostatic Diseases: From Bench to Bedside,” held during the 2015 annual meeting of the European Association of Urology in Madrid, Spain. Current data regarding the link between inflammation and BPH were reviewed. The article is complemented by relevant related literature identified on PubMed and by hand searches of key references.

PERMIN was a multicentre, exploratory, double-blind, randomised, phase 4 study designed to compare the effects of Permixon and the α1a-adrenergic receptor antagonist tamsulosin on inflammatory biomarkers secreted in the urine of patients with BPH-related LUTS. To monitor inflammatory status, a noninvasive method was used that allowed for collection of prostatic epithelial cells desquaming in the lumen of glands and seminal plasma fluid after digital rectal examination. As the methods are detailed in the original article [11], only a brief summary is provided in this report.

The primary end point was the change from baseline to study end in messenger RNA (mRNA) expression of the selected BPH inflammation markers (Table 1). Downregulation and upregulation of gene expression were considered to have occurred when a change of twofold or more from baseline was observed. Secondary end points were the change from baseline to study end in mRNA expression of selected proteins and the clinical efficacy of medical treatments based on patients’ prostatic inflammation status (change in IPSS) from day 1 to days 30 and 90.

The PERMIN study took place between June 2012 and October 2013 at 42 centres across France, Italy, Portugal, and Spain. Of 323 patients screened, 303 patients were selected and 206 patients were randomised to treatment, 102 to Permixon and 104 to tamsulosin (101 were treated). Main reasons for noninclusion were failure to meet entrance criteria (n = 64), particularly with regard to Qmax, and patient’s decision not to participate (n = 22). Nineteen patients withdrew from Permixon for reasons of safety (n = 7), efficacy (n = 2), safety and efficacy (n = 1), or other (n = 9). Eighteen patients withdrew from tamsulosin for reasons of safety (n = 3), efficacy (n = 2), or other (n = 13).

Groups were well matched at baseline for demographic and clinical characteristics (Table 2). Similar to the population in the Combination of Avodart and Tamsulosin (CombAT) study [21], PERMIN patients had moderate to severe BPH-related LUTS. 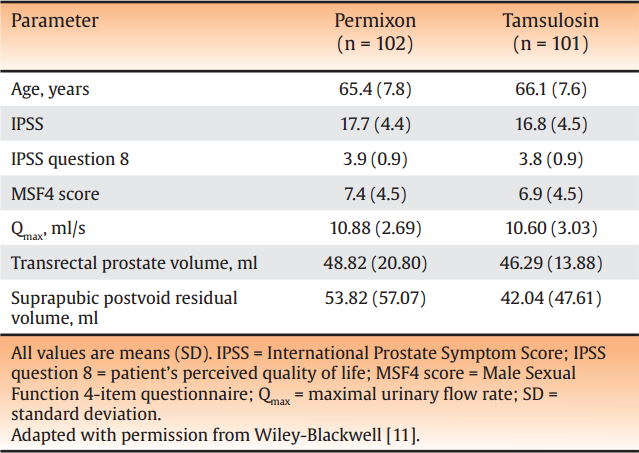 Table 2 – Baseline characteristics of patients in the PERMIN study 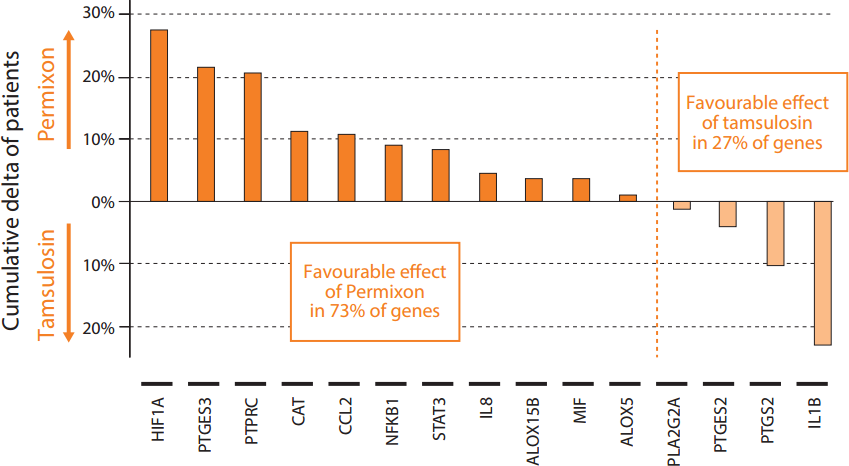 Fig. 2 – Cumulative effect of Permixon and tamsulosin on messenger RNA expression of inflammation-related genes at end of treatment (day 90). The global favourable effect corresponded to the sum of the delta of patients between treatment groups for the combination of more downregulation and fewer upregulation effects. Reproduced with permission from Wiley-Blackwell [11].

From baseline to study end, IPSS was reduced by 4.5 points with Permixon (from 17.7 to 13.2) and by 6.3 points with tamsulosin (from 16.6 to 10.3). Among Permixon-treated patients, those with greater baseline MIF expression had more pronounced symptomatic improvement (mean IPSS change) than those without MIF overexpression (Fig. 3). 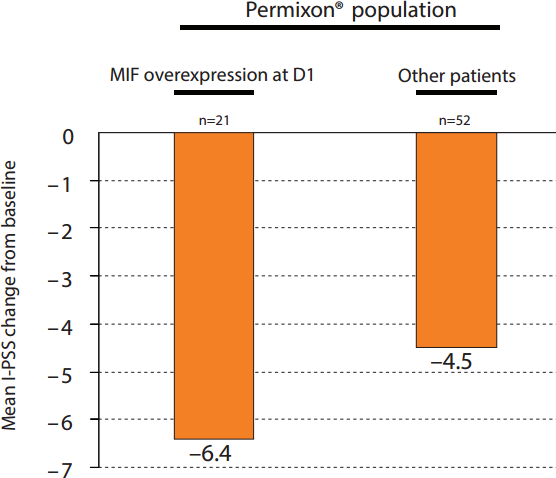 The PERMIN study is unique in that it was designed specifically to assess, in a noninvasive manner, the antiinflammatory effects of medical treatments on BPH-related LUTS. The anti-inflammatory activity of Permixon was greater than that of tamsulosin across all primary and secondary end points. A decrease in mean mRNA expression of detected BPH inflammation markers was observed in 65% of patients in the Permixon group versus 46% of patients in the tamsulosin group. Among the 15 most frequently expressed markers, Permixon had a cumulative favourable effect (more downregulation and less upregulation) on 73% of genes compared with 27% for tamsulosin.

Permixon, but not tamsulosin, decreased the proportion of patients expressing CCL2/MCP-1 and CXCL10/IP-10 proteins between baseline and study end. Between-treatment differences in MIF expression were statistically significant: MIF expression was downregulated in more patients (42.5% vs 23.9%) and upregulated in fewer patients (43.8% vs 66.2%) treated with Permixon than tamsulosin (p = 0.007). Given its role as a key player in immune response regulation with an influence on prostatic cell growth, targeting MIF may be a rational approach from clinical and therapeutic perspectives. Symptomatic improvement of LUTS was considerably more pronounced in Permixon-treated patients with than without MIF overexpression at baseline, suggesting that early treatment with Permixon may prevent unfavourable clinical evolution. Moreover, the ubiquity of MIF expression in urine samples at baseline and study end suggests that it may be a candidate biomarker to assess chronic prostatic inflammation.

The greater efficiency of Permixon in the subset of patients with MIF overexpression may be explained by benchside observations. Immunohistochemistry studies in prostate tissue samples of patients undergoing surgery for BPH have shown greater MIF expression in BPH lesions than in adjacent normal area [22]. In vitro, MIF has been shown to upregulate BPH epithelial cell line proliferation through a process involving cyclooxygenase-2 and p53 signalling [22].

The inclusion criteria of the PERMIN study also provide clues when interpreting the results for clinical practice. Eligibility was restricted to patients with moderate to severe LUTS and a high “bother” score, in contrast to other studies of plant extracts in which populations were generally limited to patients with mild to moderate symptoms. The mean improvement of 4.5 points in IPSS in Permixon-treated patients was thus a clinically meaningful result in a therapeutically challenging population.

Permixon is the only medical treatment for BPH-related LUTS with anti-inflammatory activity demonstrated in vitro, in vivo, and now in a randomised clinical trial. The favourable effect of tamsulosin observed on some genes and/or patients in the PERMIN study can likely be explained by the relief of urinary obstruction associated with effective α-blocker therapy.

G.Y. Robert has received honoraria as a consultant and speaker from Pierre Fabre Médicament.

Participation in the satellite symposium “Inflammation and Prostatic Diseases: From Bench to Bedside,” held at the annual meeting of the European Association of Urology in Madrid, Spain (March 2015), was sponsored by Pierre Fabre (Castres, France). Writing assistance was funded by Pierre Fabre.